August 28, 2013
Flachmann & Heggelbacher, an industrial software engineering company based in Germany, have released a new Windows software tool, Kickdrive Zero, for configuration and testing of CANopen networks and devices. 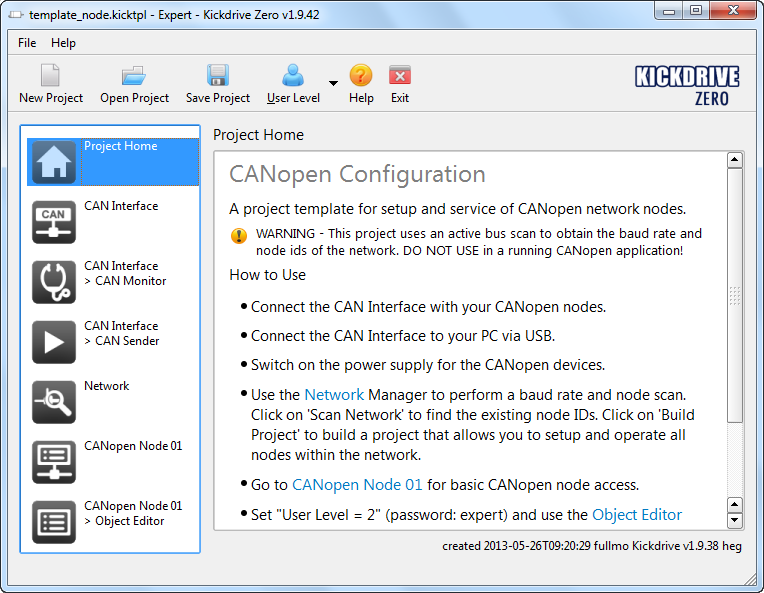 Kickdrive Zero offers multiple features for CANopen networks, position drives and other motion-oriented applications in the automation industry. With a clean and easy to use interface, Kickdrive Zero provides an essential set of tools for basic configuration, setup and testing of CAN/CANopen networks and devices. A powerful CAN bus monitor is included, with advanced search and filter functionality, as well as a trace file recorder, for later review of monitored data.  Kickdrive Zero also offers a robust SDO Object Editor and a DS402 servo drive configuration tool.

The Object Editor allows importing XDD and XDC files, the standard file formats for CANopen device description and configuration. The most relevant configuration objects, which are typically only a small fraction of the whole object dictionary, can be grouped together in a separate Node Configuration panel. Configuration presets are created and stored as Kickdrive project files, which can be freely distributed along with Kickdrive Zero.

Kickdrive Zero is licensed as Freeware, allowing free of charge use for both commercial and non-commercial applications.

For more complex applications, an advanced software edition is available: fullmo Kickdrive. It offers a greater set of features and much increased flexibility, while remaining accessible and simple to work with. fullmo Kickdrive is a dedicated rapid prototyping tool that allows combining smartphone-like user interfaces with servo drive configuration and control tasks. Applications include automated testing systems, one-click service tools for field service, and standalone multi-axis servo drive control.
For more information about the Kickdrive family of products, along with software downloads and documentation, visit http://www.kickdrive.de.

Popular posts from this blog

January 25, 2017
During the winter break we freshened up our Kickdrive software releases. So new versions v2.0 are available for  Kickdrive Zero, our freeware CANopen windows tool. fullmo Kickdrive, which allows you to do so much more .  You can grab a copy of the updated software from here: http://kickdrive.de/en/index.html?download.htm Changes include: Added support for CANopen data types REAL32 and  OCTET_STRING  Windows 10 compatibility adjustments(especially for fullmo USB2Drive hardware) Baud/Node scan uses now "Reset Nodes" instead of "Start Nodes" Object Editor: Export actual values to .xdc and additional formats (.csv, .cdcf, .txt) The UI Panel now uses the updated QML2 language Other minor corrections and fixes. For a complete overview see the Kickdrive Release Notes .  We'd like to thank the Kickdrive users for their encouraging and helpful feedback. We do realize that Kickdrive releases come a bit slowly. This is because we are v
Post a Comment
Read more

Now available: fullmo USB2drive - the advanced USB to CAN and RS485 gateway

January 18, 2015
While supporting a wide range of third-party CAN Bus interfaces in fullmo Kickdrive and Kickdrive Zero, the fullmo product family is designed as a complete toolkit from gears, positioning drives, master control to the actual HMI software. The new fullmo USB2drive is the missing link between Kickdrive software and CAN/CANopen or RS485 drive environments. fullmo Kickdrive automatically manages the USB2drive features and each Kickdrive application can deliver its own application firmware to the USB2drive. (For programmers - here's how it's done .) The advantages for developers, integrators and end users are obvious: Flexibility - the USB2drive can be whatever you want it to be: A CAN bus interface, a RS485 drive gateway, a master control running your own Python script. Extensibility - new and upcoming firmware variants allow for new applications - multi-axis master control, python-based master control, I/O applications, SD card logging applications, ... No breakage - us
Post a Comment
Read more

Oliver Heggelbacher
I make PC and Embedded software for machines and people. I am the creator of www.kickdrive.de and the chief maintainer for www.docklight.de - two renowned PC tools used by engineers worldwide. My developer´s life can be traced back to 1987 ( https://www.cpc-power.com/index.php?page=detail&num=3694 ) and earlier. Since then, I have learned how to use less psychedelic color schemes and that I really should stay away from computer games. Today I build reliable and easy-to-use industrial applications that make engineers' lives easier.